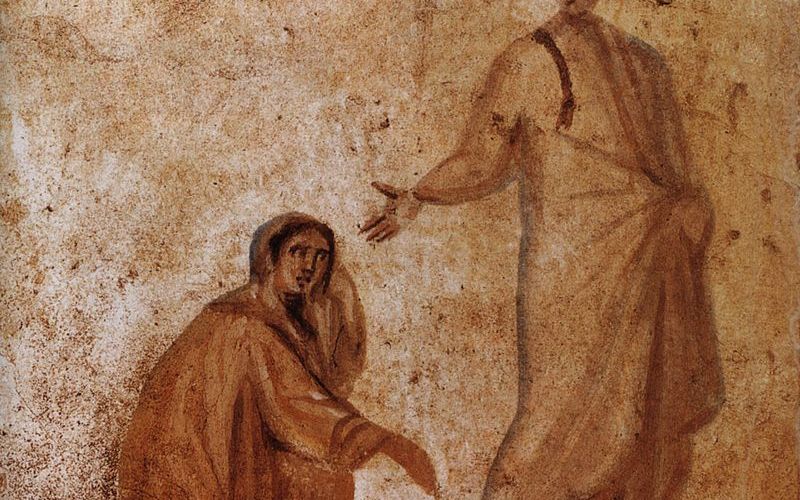 Since the Rome Italy Temple being dedicated this weekend, I’m going a little unconventional for a minute … cuz this is just cool. We have art in ancient Roman catacombs of the stories that we are studying this week from around 240 CE through the later 400’s CE. Isn’t it incredible that we have paintings of the stories of Jesus so soon after the time he was on the earth?? I love it. (I don’t have many catacomb pictures on this post due to copyright issues, but do a Google search and you’ll find a ton.) First, let’s learn a little about the earliest Christian art and earliest depictions of Jesus on the planet, shall we?

No trace of Christian art has been found from the late first or second century CE. No one is sure why, but possibly due to the heavy persecution Christians experienced for several hundred years after Jesus. Christian art emerged in the early third century and, as the Romans did so well, the Christian Romans began to express their beliefs through art. Some of the best examples can be found in the Roman catacombs. These paintings are precious to Christian history as they are the earliest surviving examples of Christian art from this era.

The Roman catacombs were used from around 200 CE to the early 400’s CE. Hundreds of thousands of the poorer people in society were laid to rest here, many of them were Jews and Christians. The custom in Rome at the time was to burn the dead, however, Christians buried their dead due to their belief in life after death. Bodies were not permitted to be buried within the city limits of Rome, so the catacombs were built on the outskirts. Approximately 70 catacombs have been found.

The paintings on the walls of the catacombs have themes of salvation, healing, and resurrection. These symbolic stories were meaningful in this funerary context. The most common scenes from the life of Jesus were chosen to illustrate salvation from death, such as raising Lazarus, and stories of healing, such as the healing of the paralytic.

The Roman influence of the artists can often be seen in the Roman hairstyle and clothing they depicted. It isn’t until later in the fourth century that we start to see a bearded, long-haired Jesus rather than with a clean shaven, short haired Roman appearance.

THE WOMAN WITH THE ISSUE OF BLOOD

The woman with the issue of blood had been bleeding for 12 years. Because of her bleeding, the law of Moses declared her ritually unclean. The law of Moses also declared that anyone who touched her would become ritually unclean as well (See Leviticus 15:19-33). She would have been socially ostracized (out of fear for becoming ritually unclean from her) and it was likely that hadn’t experienced human touch during those entire 12 YEARS! Can you imagine? She certainly would have been desperate for a cure and she “had spent all that she had” to be healed (Mark 5:26). Her faith in Jesus made her whole.

Have you ever considered why certain stories are placed where they are in the scriptures? The authors and redactors of the Bible were deliberate with their placement of the stories in each book. They are organized with intended purpose and meaning. For example:

“Mark interrupted the story of Jairus to report the story of a woman who was healed from persistent bleeding … Following the stories that had just been told, Mark highlights the source of Jesus’s power. In this example, Jesus possesses the power Himself. It emanated from Him, and when someone touched Him, He knew that power had left Him. The word translated as (virtue) can also mean ‘influence, power, and strength.’ Jesus acknowledged that the woman’s faith was the reason she was healed.”

Scripture Study Made Simple: The New Testament by Thomas Wayment

THE HEALING OF THE PARALYTIC IN CAPERNAUM

“…Before healing the man, he makes a pronouncement that causes contention with some of the Jewish scribes present: “Son, thy sins be forgiven thee” (Mark 2:5).  When the scribes began to think to themselves that Jesus’ statement was blasphemous, he perceived their thoughts and set the healing of this paralyzed man into a larger, more symbolic setting: “Why reason ye these things in your hearts?  Whether is it easier to say to the sick of the palsy, Thy sins be forgiven thee; or to say, Arise, and take up thy bed, and walk?  But that ye may know that the Son of man hath power on earth to forgive sins, (he saith to the sick of the palsy,) I say unto thee, Arise, and take up thy bed, and go thy way into thine house” (Mark 2:8–11).

“…which one is, in fact, more difficult?  While curing paralysis with a word seems impossible to us, to actually forgive a man’s sins … required that Jesus take upon himself those sins, suffer for them, and then die for them.”

A Paralytic Forgiven and Healed by Eric D. Huntsman

Before the paralytic was healed, Jesus first saw the faith of his friends.
“When Jesus saw their faith, he said unto the sick of the palsy, Son, thy sins be forgiven thee.” Mark 2:5

If you’re interested in looking at all the miracles charted out, visit this BYU Studies Quarterly page.

Have you ever thought about the value of faith in your life? As you study the miracles, look at the role faith played in each circumstance. Faith was a precursor. Just as Jesus had the power to perform miracles in the lives of those he interacted with in the flesh, so does Jesus truly have the power to perform miracles in each our lives today. These miraculous stories of outward, physical healing can also be seen as symbolic of the miraculous, inward healing Jesus is able to perform on each of us. Whether the healing comes in this life or the next, the miraculous thing is that it will happen. It all begins with faith. Then the miracles will follow. Faith precedes the miracle.

See this talk on being made whole by Matthew L. Carpenter from the October 2018 General Conference.

“When any child of God is broken or feels that he is falling apart, faith in Jesus can make him whole again.” Verse By Verse, The Four Gospels by D. Kelly Ogden and Andrew C. Skinner

“For if there be no faith among the children of men God can do no miracle among them … And neither at any time hath any wrought miracles until after their faith; wherefore they first believed in the Son of God.” Ether 12:12, 18

To learn more on the power of faith, see this page on ChurchofJesusChrist.org containing links to articles, talks, videos, and music all on faith.